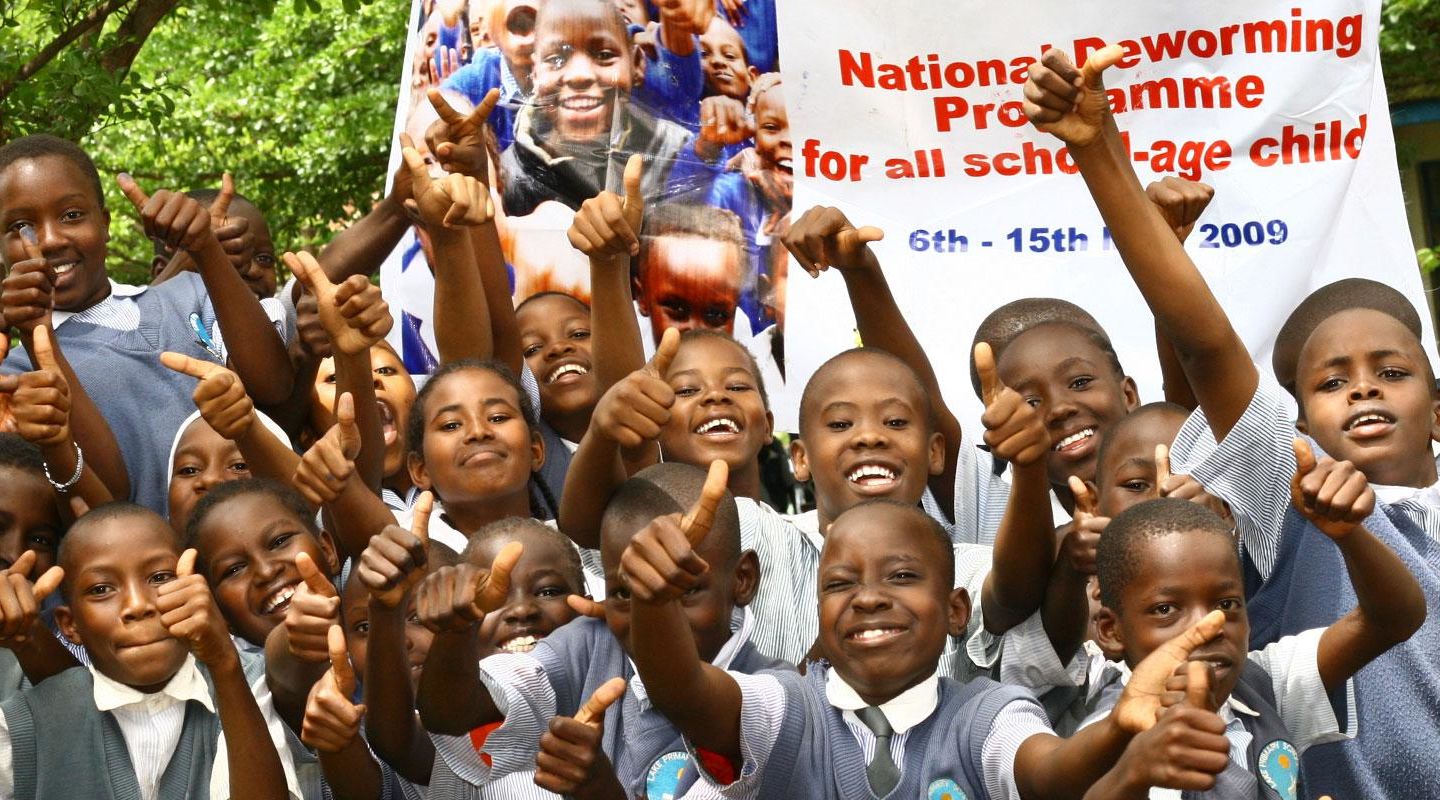 School-based treatment gives millions of Kenyan children a worm-free childhood, with lifelong benefits for their health and livelihoods

Proper childhood nutrition lays the foundation for children to learn, thrive, and grow into healthy adults. Yet worldwide, close to 900 million children are at risk of infection with soil-transmitted worms or helminths (STH), with many at dual risk for schistosomiasis too.source In the Busia region of Kenya, a worm-filled childhood was the norm until the government implemented a nationanl school-based deworming program.

For years, experts had theorized that mass deworming could bring about health and educational potential for millions of children, but lacked solid evidentiary support. Two leading development economists, Edward Miguel of UC Berkeley and Michael Kremer of Harvard, thus set out to analyze the impact of deworming on children’s health and education. They evaluated International Christelijk Steunfonds Africa’s Primary School Deworming Project, which targeted children in 75 primary schools in the Busia region of Kenya with anti-STH and anti-schistosome treatment. Their 2001 evaluation results were inspiring: school-based deworming treatment kick-started a virtuous cycle of lower worm loads, improved growth, and fewer school absences among children.source

However, mass deworming came to a halt when corruption was revealed in the Ministry of Health, and donors fled the project. But Deworm the World, an initiative founded a few years prior by Kremer and MIT economist Esther Duflo, stepped in to provide technical assistance and became the program’s “fiscal agent.” With new donations from the Children’s Investment Fund Foundation and the END Fund, school-based deworming resumed in 2012. By 2014, Kenya’s deworming program was administering anti-STH medication to 6.4 million children and antischistosome treatment to 890,000 children each year.source

The evidence of success in the Kenyan setting has inspired a global response, including mass deworming programs in other countries, including India, the country with the highest worm burden globally

Encouraging results from the Busia trial provided a strong basis for national scale-up. Researchers’ analysis showed that one year after the intervention, children who received deworming children treatment were 44 percent less likely to have a moderate or severe worm infection.source As a result, they were significantly taller, less likely to report being sick, and less likely to miss school than they would have been without treatment. The long-term impact of Kenya’s national program is not yet known, but early results are promising: by late 2014, four high-burden provinces saw dramatic reductions in infection, with STH prevalence falling to just 6 percent.source

These results have come at a remarkably low cost. In Kenya, it costs about US$0.56 per treated student per year. An analysis of Kenya’s program conducted for Millions Saved yielded a cost-effectiveness ratio of US$47.20 per DALY averted.

Kenya’s efforts illustrate that delivering deeworming drugs on a national scale necessitates a sophisticated program that coordinates across schools, government ministries, and donors. It also shows that pairing decentralized delivery with measures to promote national accountability can work. And that public health interventions can impact more than health, reinforcing the need to look at synergistic gains in education, productivity, and growth. In Kenya, deworming’s wide-ranging benefits changed the lives of millions of children for the better. But the program is vulnerable given its reliance on donors, and the sustainability of the effort may be in question as Kenya faces funding battles for other disease priorities.

One Mosquito at a Time